HomeRetirement PlanningDoes a retiree need a financial advisor in his golden years?

Does a retiree need a financial advisor in his golden years? 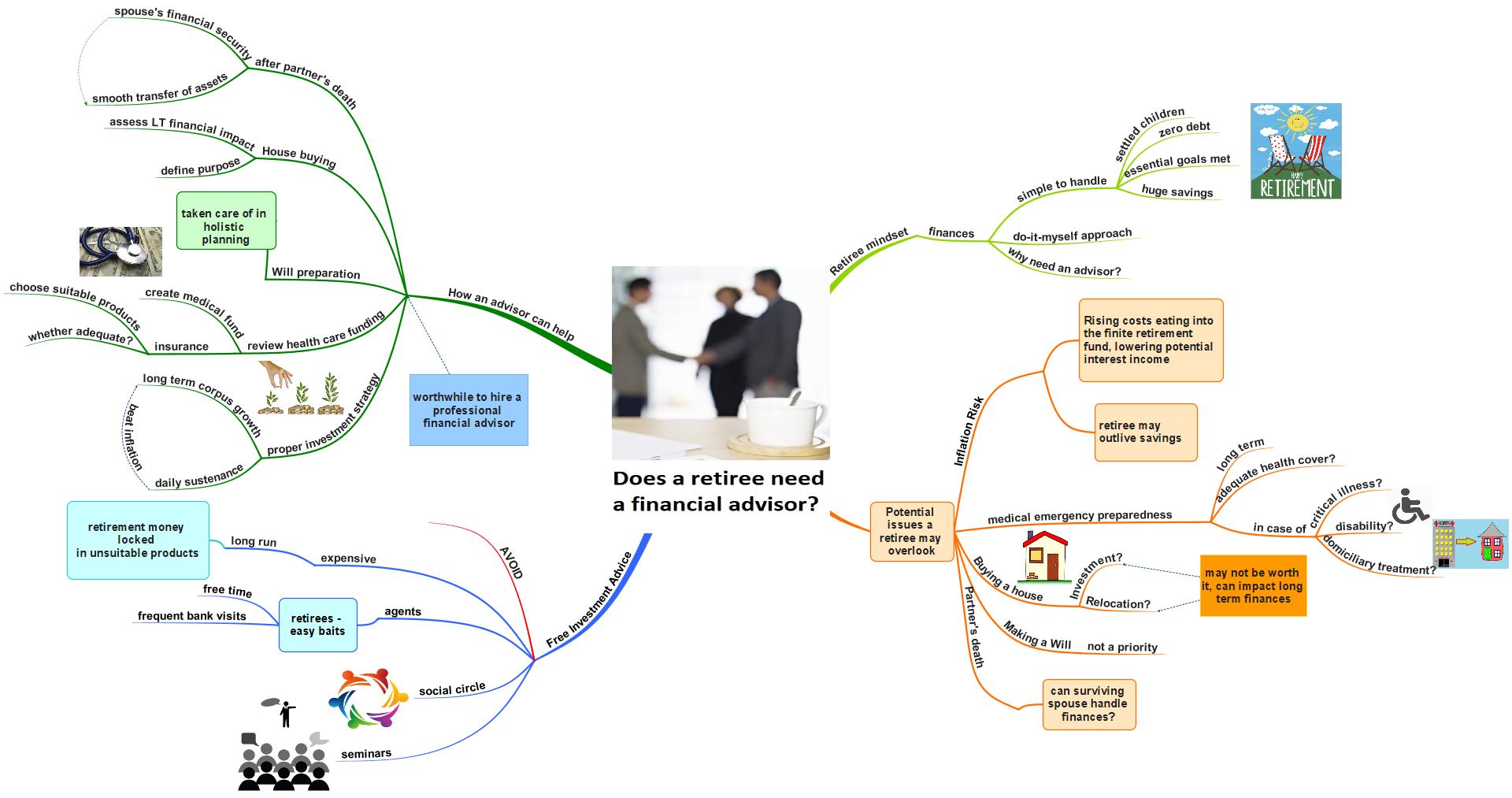 Well settled children, zero debt, essential goals met, less responsibilities – this is the typical situation of a retiree. He has saved and invested during the working years and now has a big retirement kitty. His only focus is to manage the same and regularly spend a fixed amount out of it. He may perceive his financial state to be too simplistic.

Most retirees hence usually prefer the ‘do it myself’ approach in handling finances. They see retirement as the finishing line after which financial planning becomes secondary to them. They feel they do not need a financial advisor or are not even aware of the ways an advisor can guide them. But what they do not realise is that retirement may mean the end of working life but is not the end of financial life. And, it goes beyond just managing the retirement corpus. Let us examine the issues a retiree can potentially face and how an expert advisor can provide guidance:

Beating inflation: Most retirees gravitate towards bank deposits, annuities, etc, as safety of capital and having a regular income is their primary concern. However, they fail to realise that retirement fund being a finite amount, inflation is likely to eat into it and exhaust the savings faster than they could imagine. It is also likely that retirees use up the biggest portion of their nest egg in the initial years of retirement as they are healthy and lead an active life travelling or socialising. However, dipping too deep into the corpus could reduce the potential income in the later years. During that period, there could be the burden of expensive healthcare spending and medical bills in addition to increased living expenses. It thus becomes imperative to have a portion of the retirement corpus stacked up in equities for the long term to tackle inflation risk and reducing income. A professional advisor can help formulate a proper strategy and create investment buckets – one for daily sustenance and another to grow in value over the long term and beat inflation. Further, an advisor can also periodically review the corpus and advise on budgeting, withdrawal, taxation, laddering to create regular income stream, etc.

Reviewing healthcare funding: A retiree probably has some amount of health insurance to take care of emergency needs. But he may not realise if it is sufficient over the long term. The likelihood of medical spending rises with age, not to forget healthcare inflation. The possibility of critical illness, disability, domiciliary treatment, etc, which entails huge costs cannot be ruled out. If not planned properly, it can create a big dent in the retirement savings. An expert advisor can thus guide a retiree on the quantum of health insurance required, especially in view of increased life expectancy. He can also further guide on the various products to choose from such as critical illness, diabetes related, top-up covers, health wallets, etc depending upon the retiree’s health situation. An advisor can also guide a retiree on creation of a personal medical fund for long term health care needs.

Making a Will: In the initial years of retirement, managing money, taking up a new activity, getting social, travel, etc usually take centre stage for most retirees. Preparing a Will however figure last thing on their minds. They feel they have time till eternity to bequeath their assets. While consulting a financial advisor, preparing a Will is inevitably taken care of. An advisor can guide a retiree on preparing a Will to facilitate transfer of his assets to dear ones after him and without any legal disputes.

Relocation/Lifestyle Change: In view of the big savings kitty, many retirees consider to buy a new property to relocate away from the city or just for investment. However, this crucial decision has financial implications as there would be costs involved in moving. Further, investing in a property can be risky as it is illiquid and can potentially lock up money for a long time. Many retirees do not realise the long -term impact of such decisions as they fail to take a holistic financial view. An advisor can help take an informed decision by financially assessing whether it would be really worth buying a new house in retirement or it can harm finances in the long run.

Spouse’s financial security: If there is a typical situation of one spouse handling all the finances, then the other spouse may face issues after the partner’s death. The surviving spouse would benefit from having an advisor whom the former can rely upon for unbiased advice and financial security. An advisor can also help in the smooth transition of transfer of assets after the spouse’s death.

With increased life expectancy, the retirement period in present times typically span at least 20-25 years. This period can possibly have financial uncertainties if not planned properly. Relying on free advice from social circle, seminars, bank agents, etc can prove very expensive in the long run. It would be worthwhile instead to rely on a financial advisor for professional advice. By hiring an advisor, a retiree can benefit not just in effectively utilising the resources but also for random financial issues which can crop up during the long retirement period.